Our Colorado Mountain Club Snowshoeing Routes of Colorado’s Front Range book recommended Coney Flats Trail for snowshoeing, so we decided to give it a go. This was the first trail we went on with my new Sony telephoto lens, and I was excited to test it out.

The parking spot for Coney Flats Trail is at a corner turn on the north side of Beaver Reservoir (see trail map below). We arrived at the trailhead at 8:30 AM and were the first to arrive that day. Not long after we parked, a few more cars showed up. Parking is somewhat limited at this trailhead – it’s basically extra area in the bend in the road. If people get creative with the parking, perhaps up to 10 cars can park there. 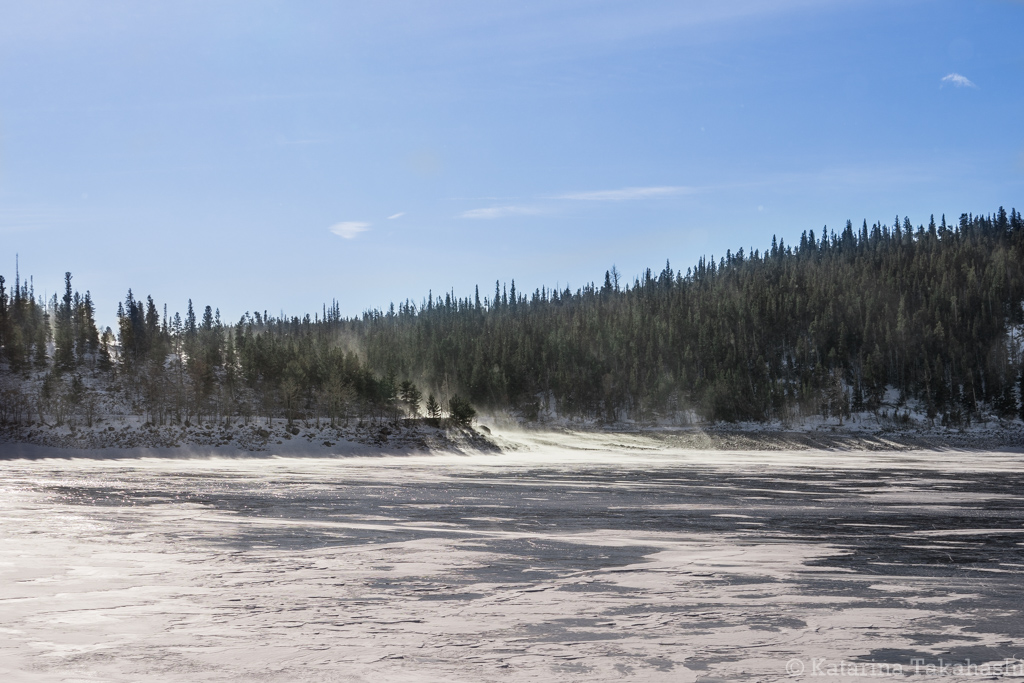 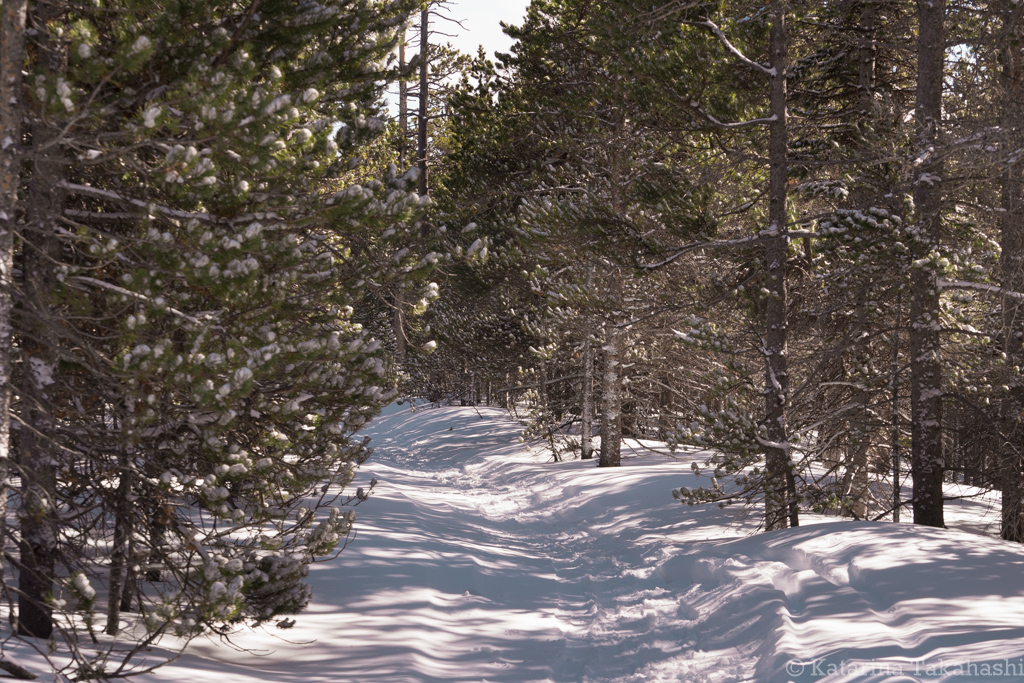 The Coney Flats Trail is relatively flat and traverses through a beautiful pine forest. As a result, it is a popular option for both snowshoeing and cross-country skiing. It is mostly narrow, so snowshoers cannot avoid treading on cross-country ski tracks. 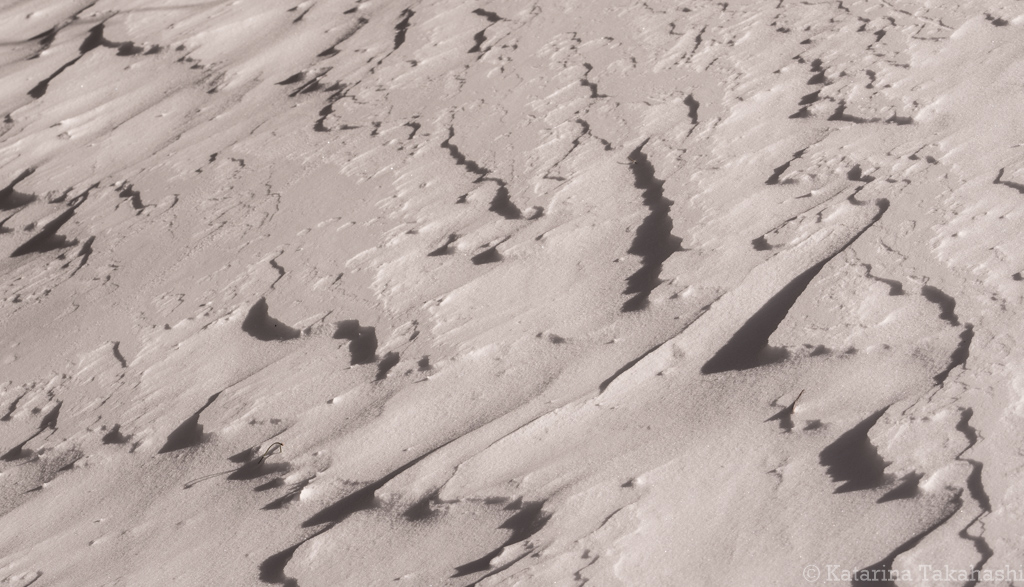 Along the way in several places we saw interesting shapes in the powdery snow created by the wind.

Other than being used for landscape photos, telephoto lenses are also great for abstract photos.

Views from the Trail 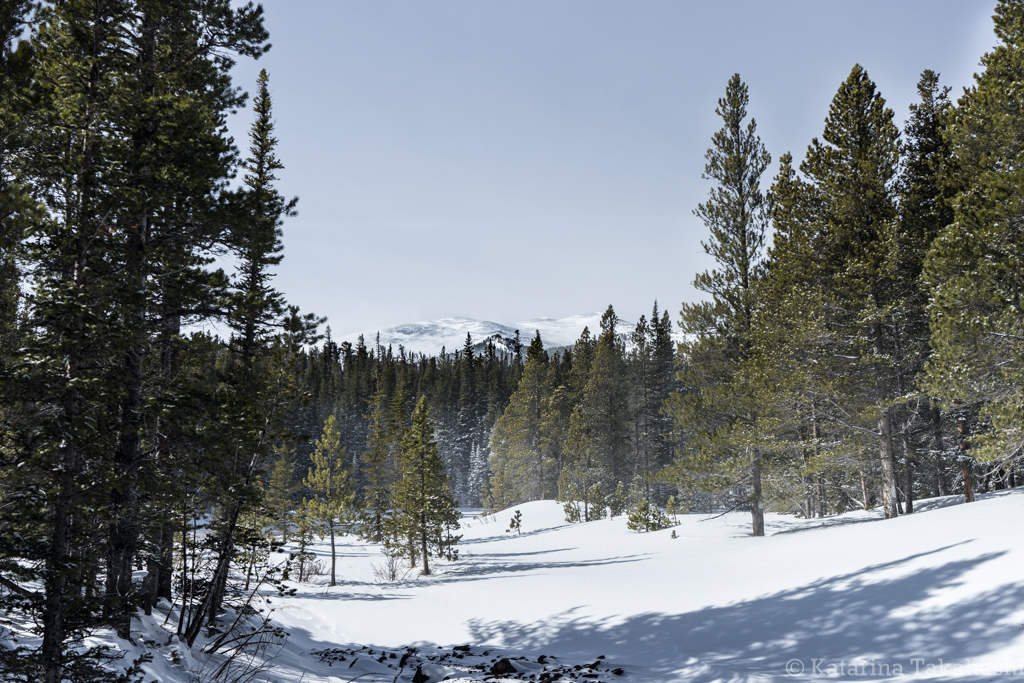 Here is a view of the mountains captured through one of a few openings in the trees that provided views.

Near the end of the Coney Flats Trail I took this picture of Mt Audubon and Paiute Peak. The wind was gusting, blowing the top layer of powdery snow into the air. It was quite cold in this exposed area, especially with the wind. I had to be quick about taking photos before my hands froze! 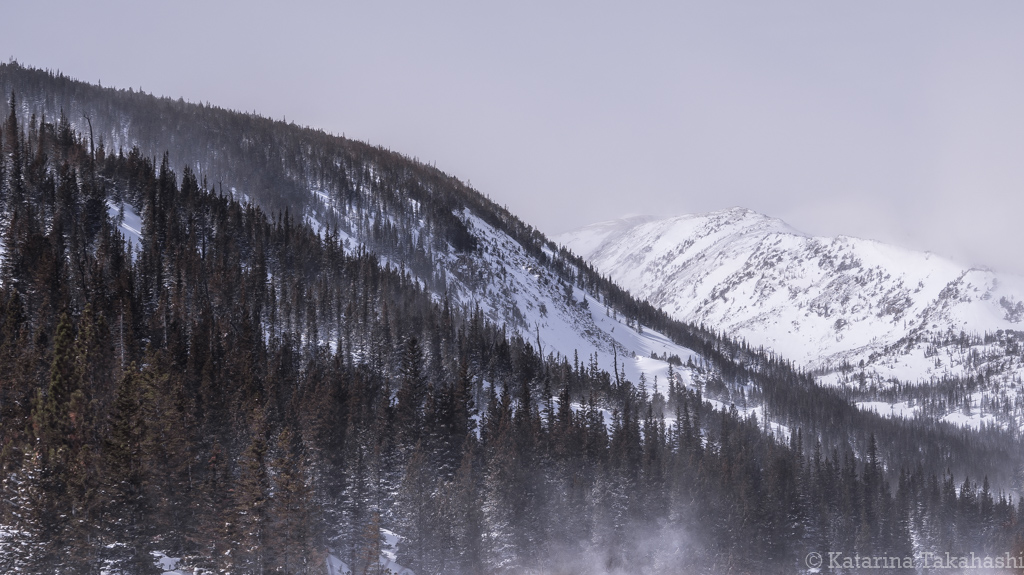 I also took this closeup of the Indian Peaks mountains with my telephoto lens. I was impressed by how far I could zoom in and the detail of the trees.

The way back was a bit easier than the way out because it was slightly downhill and we were not taking as many pictures. 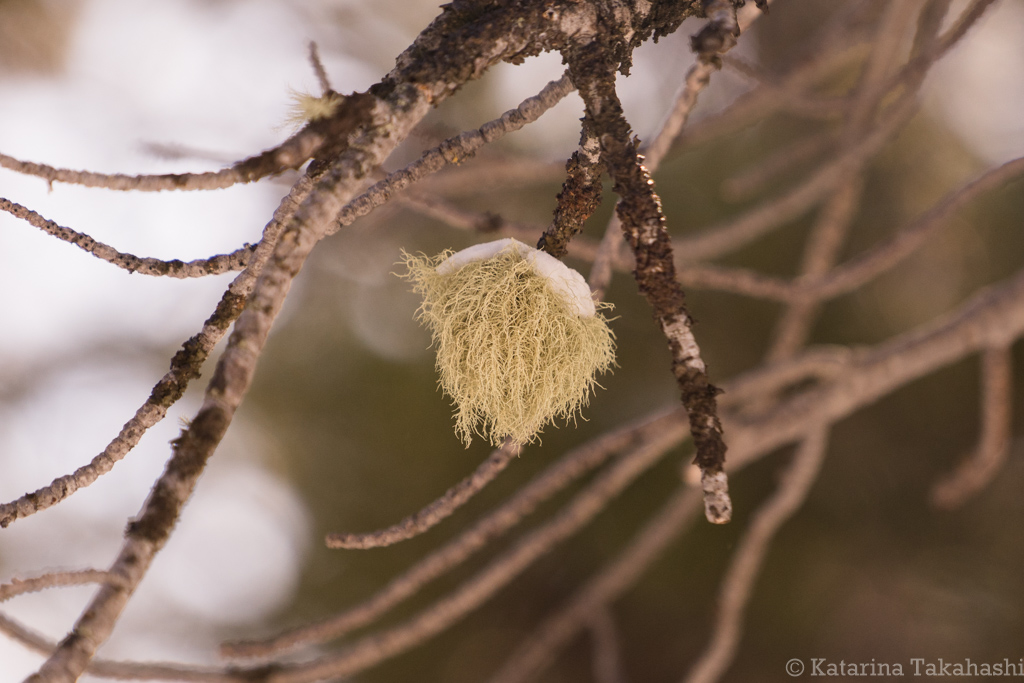 Moss in the Trees

We saw a lot of these puffy clumps of moss in the trees along the way. I have yet been able to identify it. 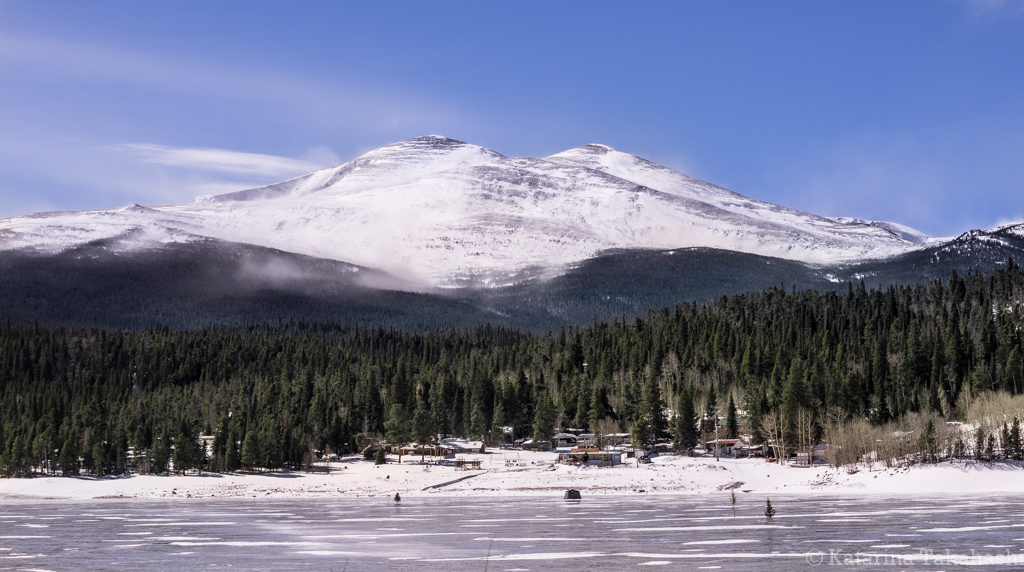 After we finished our snowshoe trek, we decided to take pictures of the mountains that can be more clearly seen from Beaver Reservoir – Mt Audubon and Paiute Peak. Both are “thirteeners” – mountains that rise between 13,000-13,999 feet above sea level.  They also both have hiking trails you can check out — Mt Audubon Hike / Paiute Peak Hike.

As you can see, the tops of these mountains rise well above the tree line (also known as the timberline). According to Trails.com, the tree line in Colorado varies between 11,000 and 12,000 ft above sea level. 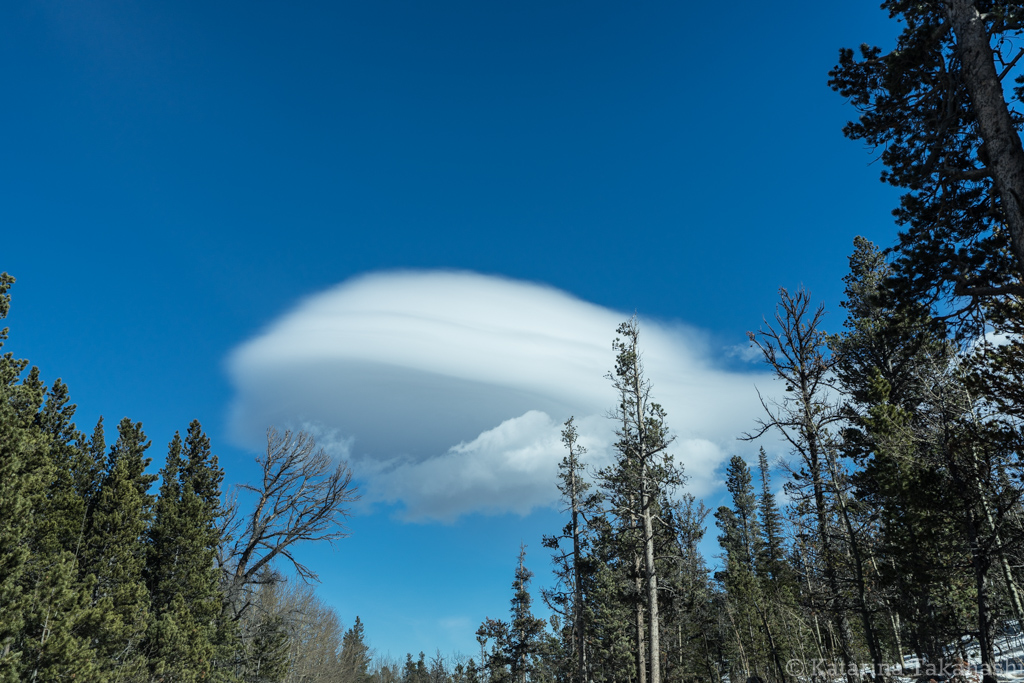 On our drive down the road back to Ward from Beaver Reservoir, we saw this beautiful UFO-shaped lenticular cloud. I’d never seen a lenticular cloud before in person (only on Twitter and Instagram posts), so it was a special occasion. Just the other day we also saw huge ones.

What is a lenticular cloud? And why do they seem relatively common here in Boulder?

According to Weather Underground –

“A lenticular cloud is a lens-shaped cloud that normally develops on the downwind side of a mountain or mountain range. This occurs when stable, moist air flows over a mountain, creating a series of oscillating waves. If the temperature at the crest of the wave equals the dew point temperature, condensation occurs in a lens formation. As the air falls down the trough of the wave, where the temperature and dew point temperature are not equal, evaporation occurs. Thus, a wave cloud, or a series of lenticular clouds, is capable of forming. ”

Well, that explains it!

Recommended as a Snowshoe Trek